The preservation of Architectural Heritage is one of the most important cultural assets of a place and fundamentally shapes its unique identity. The protection, promotion and effective use of our cultural heritage is now imperative.

Architectural Heritage encapsulates values that are important for each place. Values associated with memories, with cultural, socio - economic and utility values, as well as values regarding aesthetic quality and sustainable development. It is directly related to the history of the place where it has evolved and is an important reference point of modern life. The recording and analysis of Architectural Heritage are prerequisites for its preservation and constitute a solid base for the planning of the contemporary and future development of each place. It is yet another interesting challenge for the modern architectural creation process.

Traditional Architecture, which is part of our architectural heritage, defines our cultural identity to a certain extent. Its protection and promotion is feasible only through the proper maintenance and the inclusion of traditional buildings in a status of protection by designating them as listed monuments in accordance with Law 3028/2002 on the “Protection of Antiquities and Cultural Heritage in general”.

Within this context and in accordance with the goals set and described in the Memorandum of Association, Anthi Tis Petras have undertaken, since the fall of 2017, a series of initiatives towards the designation of important works of the Lagadia traditional art of stone as protected and listed monuments. The successful completion of the procedures regarding the designation of monuments requires the preparation of a comprehensive file which should include the historical and architectural documentation in connection with the specific request.

So far, the efforts of Anthi Tis Petras have resulted in the designation of the Mana Sanatorium in Magouliana, the historic building of the High School of Lagadia and the Rigopoulos family mansion in Lagadia, Arcadia. Furthermore, Anthi Tis Petras are drawing up files regarding other buildings of traditional architecture and their designation as monuments so as to submit the respective applications to the Ministry of Culture. 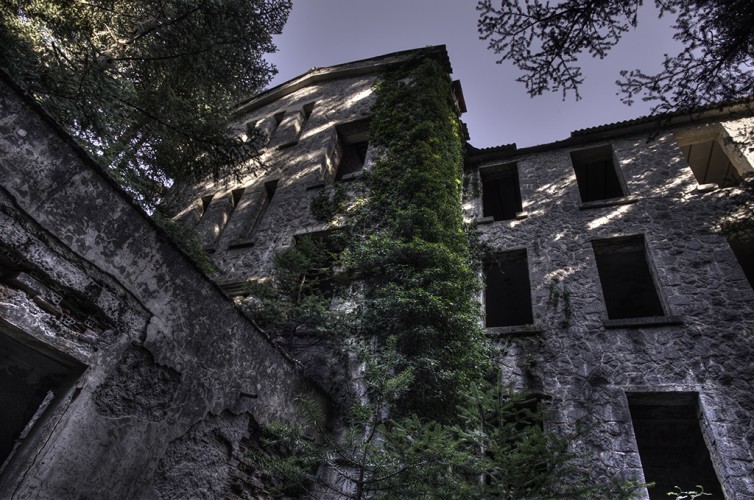 The Mana Sanatorium was built on the initiative of Anna Mela-Papadopoulou (Pavlos Mela’s sister) who managed to raise a large amount of money for this purpose through fundraisers. In parallel, she had the active support of Eleftherios Venizelos. It is a fine example of hospital architecture of the interwar period. It was built at the beginning of the 20th century by organized groups of Lagadia craftsmen with local black stone and was based on designs created by Xenophon Angelidis’ (1877-1970), a famous architect of the time. It operated as a model sanatorium for a period of approximately ten years (1930-1940) by the end of which it was abandoned. Over time, it did not receive adequate protection and as a result was looted and suffered significant damage.

Anthi Tis Petras, with their systematic efforts which lasted over a year, succeeded in the designation of the building envelope of the Mana Sanatorium located in Magouliana, Arcadia (Korfoxylia location) as a listed monument by a ministerial decision published in the 2019 Issue of the Government Gazette of the Hellenic Republic. The unanimous opinion of the Central Council of Modern Monuments concluded that "…… it is a highly remarkable example of this special building type, with particularly remarkable features from an architectural, typological and morphological point of view and is evidence of the architectural, social, economic and cultural evolution of the area in the early 20th century...". 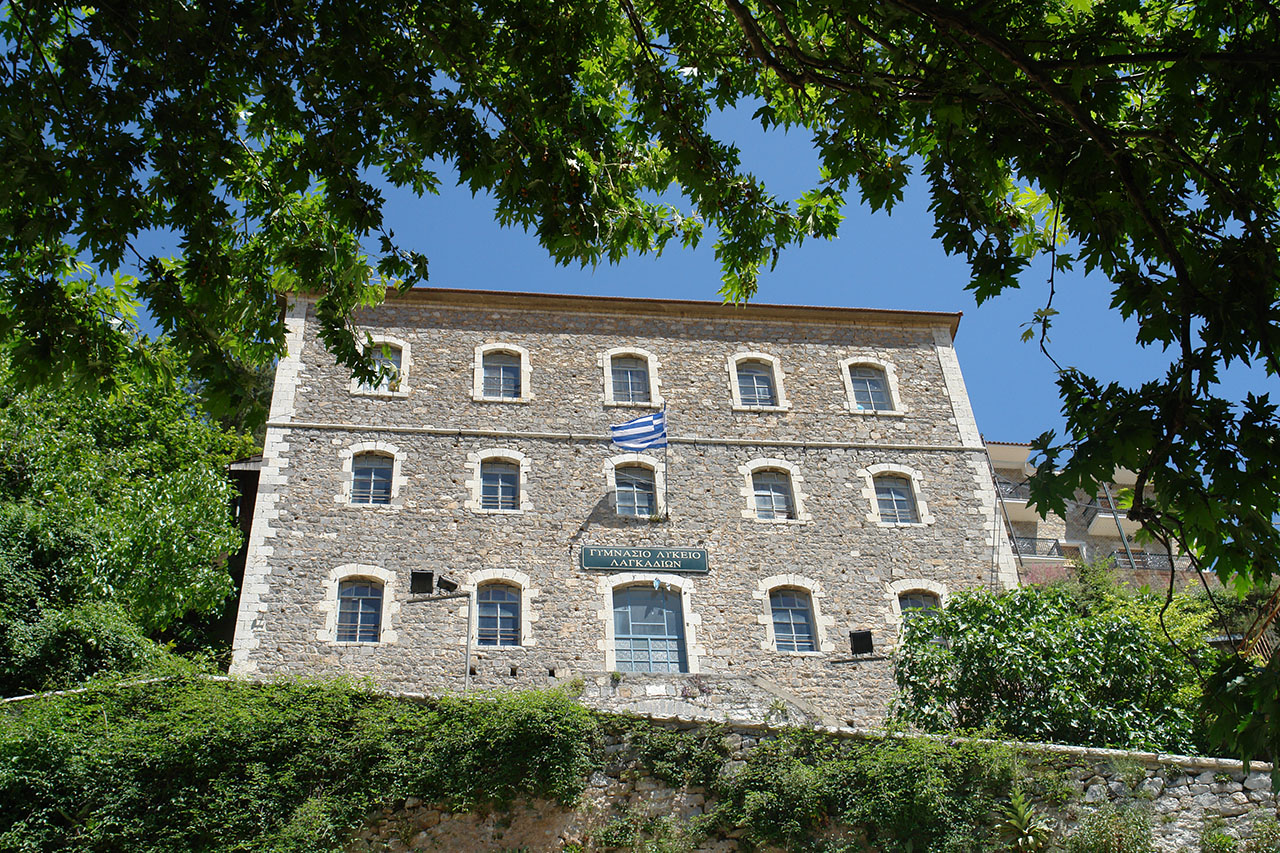 It is an imposing three-storey building of excellent quality stonework, located in the center of the settlement, a representative sample of the art of the Lagadia craftsmen. It is of great historical value for the wider area of Gortynia, since it contributed decisively –by providing high quality education– to the intellectual and economic development of the area.

It was built in 1868, with a donation made by an expatriate from Istanbul, Dim. Dimitrakopoulos (Voggizas), a wealthy merchant from Lagadia, who actively participated in the Greek Revolution of 1821. Sinos Giokas, Antonios Katsanos and Vassilis Lolos were the protomastores (master craftsmen) of the project. Anthi Tis Petras, in the framework of their initiatives for the protection of important monuments of traditional architecture, had been promoting since March 2018 a request for the designation of the Gymnasium (High School) of Lagadia as a listed historical monument.

The final opinion issued by the Central Council of Modern Monuments on 28/11/2019, was unanimously positive and “…. in favor of the designation of the building –together with the serpentine staircase which connects it with the municipal road, without the newest additions made in extension to the west side of the building and in the roof addition of the third floor– as a monument, according to article 6, par.1b of Law 3028/2002, because it displays remarkable architectural and morphological features, is an integral part of the settlement of Lagadia due to its special use as an educational building for many years, and is associated with the memories of the locals. Therefore, it documents the evolution of the area at the end of the 19th and the beginning of the 20th century, from an architectural, historical and cultural point of view ".. 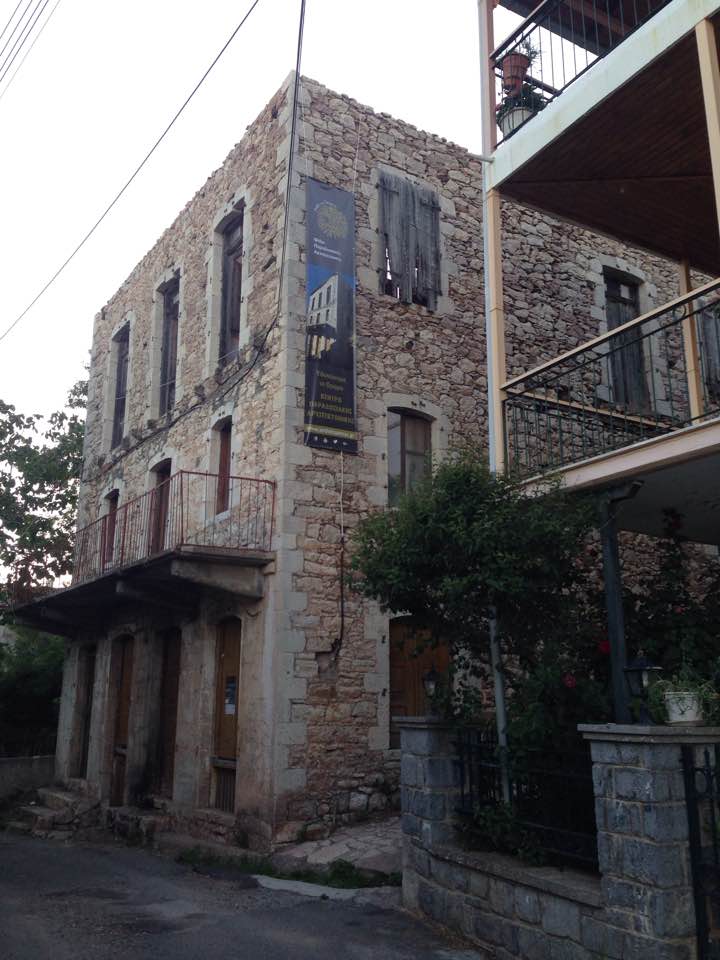 It was purchased through crowdfunding by Anthi Tis Petras in 2017 with the intention to create the 1st Center of Traditional Architecture and Stone in Greece. It is planned to include an exhibition-museum section (history of the masonry craftsmanship, contracts, tools, photographs, etc.), a workshop where the art of stone will be demonstrated, a screening room and a library for the hosting and organizing cultural and educational activities..

The request for the designation of the building as a monument was submitted by Anthi Tis Petras in June 2019.

It was declared a monument because, according to the unanimous decision issued by the Central Council of Modern Monuments and published in Government Gazette of the Hellenic Republic Issue no. 91- 03/03/2021 "… it possesses remarkable architectural and morphological features and special construction and building features characteristic of the art of the Lagadia craftsmen. Therefore, it serves as an important piece of documentation for the study of the evolution of the area from an architectural, morphological, economic and social point of view.”.